Best Hockey Teams of the Moment

Obviously, when trying to make the greatest list, the first thing anyone would do is look at the current official rankings and point to the teams that occupy the first places. However, avid hockey fans often take into account different other criteria when determining the best teams of today, like loyalty, spectacle, performance, and others. Below you can find our picks for the best hockey teams of the moment.

Pittsburgh Penguins – Founded back in 1967, Pittsburgh Penguins was one of the first teams formed during the National Hockey League’s expansion from six to twelve teams. They are the holders of eight division titles and won the Stanley Cup five times. The most recent wins were achieved in 2016 and 2017, which made them the first team in 19 years to defend their title in consecutive years and become back-to-back champions.

In the 2017–18 season, the Penguins did qualify for the Stanley Cup playoffs and obtained the victory over the Philadelphia Flyers in the First Round in six games, but sadly they were defeated by the Capitals in six games, finishing the season with 100 points. 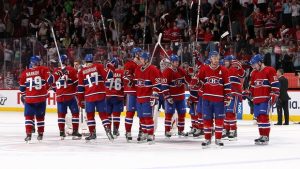 The Montreal Canadiens – This is the only hockey team that was actually founded before the NHL. This is because the Canadiens are the oldest professional sports franchise in the USA, having been founded in 1909. They are the longest operating hockey team worldwide and one of the best still to these days. Additionally, the Canadiens hold the record for most Stanley Cup titles won – 24, one of which was obtained pre-NHL.

What’s more, sixty-four players inducted into the Hockey Hall of Fame are associated with the Montreal Canadiens, which says something about the team’s performance level.

Toronto Maple Leafs –Toronto is a team that has its flaws and weaknesses, but can also provide an entertaining show on the ice field. They are the second most valuable team in the NHL at the moment, with an estimated value of US $1.4 billion. During the 2017–18 season, the Maple Leafs managed to amass 105 points, beating their previous record (103 points set in 2014).

Chicago Blackhawks – The Chicago-based team is one of the “Original Six” NHL teams and was founded in 1926. They managed to snatch six Stanley Cup titles, the last one in 2015.

Though they had a great start of the season in 2017, with an impressive 10–1 win over the Pittsburgh Penguins, by the end of the season they fell to the bottom of the Central Division due to inconsistent defense and limited offense.

New York Rangers – Although in the last season, they had a lackluster performance, the New York Rangers are still considered one of the best hockey teams of today. They are one of the oldest teams in the NHL and were the first US-based team to become Stanley Cup winners.