Every year, the International Ice Hockey Federation, or the IIHF, organizes the Ice Hockey World Championship. The event was founded for the 1920 Olympics and has been popular ever since. Here are a few things we can expect in 2020.

Let us start by saying that the Championship occurs roughly at the same time as the NHL playoffs, meaning that some of the top players are usually focused on that and don’t participate in the IHWC.

There are 16 teams in the championship group and Division I and II with 12 players each. If the total number of teams exceeds 40, the remaining teams compete in Division III. To play, players have to be 18 or older, representing their country, and under the jurisdiction of IIHF. If a player wants to play for another country, they have to have played for that country for 4 years or 2 if they were not registered beforehand.

Regarding major infractions, like fighting players, those that broke the rules are eliminated from the game. In IIHF, the game is stopped once the puck crosses the goal line. The IIHF also allows two-line passes. There are a few other rules not used by the NHL, but the specifics can be somewhat complex. 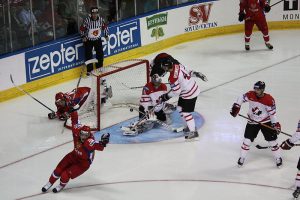 On the 8th of May, Canada will face off against Germany. This will be tough for the Germans, seeing as how Canada made it to the final in 2019. At the same time, there is a match between Finland and the US. The Americans will have to give it their all since Finland won their third title this year.

Sweden will take on the Czech Republic and Russia Switzerland. It is relatively safe to say the Swiss are not going to be able to step up during their first match of the championship. On the other hand, we have no idea how the match between Sweden and the Czech Republic is going to turn out.

Judging from the results of 2019, it is likely that Italy will drop out early in the tournament, though they can turn things around. We expect Great Britain will encounter similar difficulties along its path.

We expect great things from Finland, Canada, and Russia. One could argue that these countries have a bit of an unfair advantage, given their climate. Nevertheless, their hard work in the previous tournaments cannot be denied.

Teams that were relegated to Division I last year are France and Austria, ending the tournament with a score of 2 and 1, respectively. Both teams better watch out for Romania, as the country managed to get promoted from Division I-B.

Serbia is going to present a bit of a challenge to others in Division I-B, due to their promotion from II-A. However, this, like everything else in this piece, is pure speculation based on last year’s results. We could very well be surprised once the tournament starts next year.