Why Can NHL Players Fight?

One of the most time-honored traditions of hockey games is that, unlike in other sports, players are allowed to settle their differences inside the playing area. However, one has to ask how this can be allowed. Surely, there is a reason for letting people exchange blows with each other?

There are many reasons, minor and major, that make the players throw off their gloves and put up their fists. One of the most common ones is the feeling of loyalty and camaraderie that makes you want to get up close and personal with the opposing team. Some fights are retaliatory in nature, meaning that you want to teach someone a lesson for hurting you during the game or pay them back for a previous match.

Sometimes, though, fights are a part of the team’s strategy. If the opposing team has one player you really need to watch out for, taking them out by provoking them into a fight might level the playing field, so to speak. Some fights break out, while others are planned. 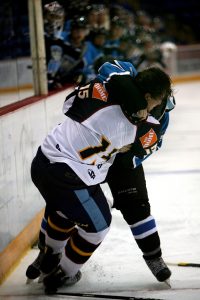 Remarkably, the fights in question have a set of rules that need to be followed. First of all, the players that fight are not thrown out of the game, they are merely given a five-minute penalty for the first fight. Secondly, the fighting players must drop their sticks in order not to use them as weapons and throw off their gloves in order to lessen the damage of the blows. For that same reason, helmets must stay on. There is also another very important part of the etiquette involved – players must agree to a fight. That means that if one player wants to fight and the other doesn’t, the fists are not going to fly. Finally, the ref says when the fight is over.

Sometimes, a player is too valuable for the team, or they lack the strength and skills for true hand-to-hand combat. If this is the case, instead of the people who were the cause or the target of the fight, the fight is played out by enforcers.

Is the #BattleofAlberta now the best rivalry? We have a look at the recent shenanigans linked in our story.

Truth be told, fighting is one of the reasons people come to watch hockey games. The defenders of the tradition say that fighting also increases the level of loyalty among team members, strengthening their bond. It also serves to curb the violence, as strange as that may seem. If you take out your frustrations on the opposing player in a relatively fair match, there is no reason for either of you to seek out the other later and exact vengeance through serious injury. As it stands, it seems that fighting is always going to be a part of this sport, as very few hockey officials see it as problematic.

The effect fighting has on the game in terms of impeding progress is minimal. In fact, one could even argue that it is inconsequential – if fighting is allowed for all teams, then they all face the same conditions and penalties if they occur.

Fighting is, ultimately, an inseparable part of the game that deals with honor, loyalty, and the bond between the players. Compare it, if you will, to fights among soccer fans, only in a much more controlled setting and with less damage and fewer casualties. It is not a barbaric display, but a venting procedure.